The top security cabinet has approved funding to upgrade a section of the security fence in the West Bank, the prime minister’s office announced on Sunday.

According to a statement, ministers voted unanimously to allocate NIS 300 million (about $93 million) to improve a 40-kilometre stretch of the barrier along the so-called seam line.

The move came after the terrorist who killed five people on March 29 in Bnei Brak entered Israel through a breach in the fence, and security officials suspect the Palestinian assailant who shot dead three people in Tel Aviv Thursday did the same.

“We will fight terrorism with all the tools at our disposal and we will win,” Prime Minister Naftali Bennett tweeted after the cabinet meeting.

According to the Defense Ministry, the money will fund the upgrade of a 40-kilometre (25-mile) stretch of the barrier from the Salem area in the northern West Bank to Israel’s Bat Hefer area – the one of the first sections of the barrier ever built.

“The barrier will consist of concrete, protective equipment and additional technological components. It will be up to 9 meters (29.5 feet) high and will replace the fence that was built around 20 years ago,” the ministry said, adding that it expected to start work in the coming weeks.

A section of the Israeli security fence between the Jewish settlement of Modiin Illit, right, and the outskirts of the West Bank village of Bilin, near Ramallah, June 23, 2011. (AP Photo/Ariel Schalit)

Senior security officials have told Hebrew media they believe the Tel Aviv terrorist entered Israel through a hole in the security fence near Jenin, even though the military recently fortified the fence in that area. area.

The West Bank security barrier was first suggested in the 1990s by the late Prime Minister Yitzhak Rabin, who saw it as a way to separate Israel from the Palestinians. But the project never materialized due to internal opposition.

It was only during the second Intifada, as Israel fought off waves of suicide bombings and other terrorist attacks emanating from the West Bank, that the idea was revived and kicked into high gear.

Many credit the barrier with helping to end this uprising, which lasted from 2000 to 2005, although of its planned 708-kilometre (440-mile) route, only 62% was completed. 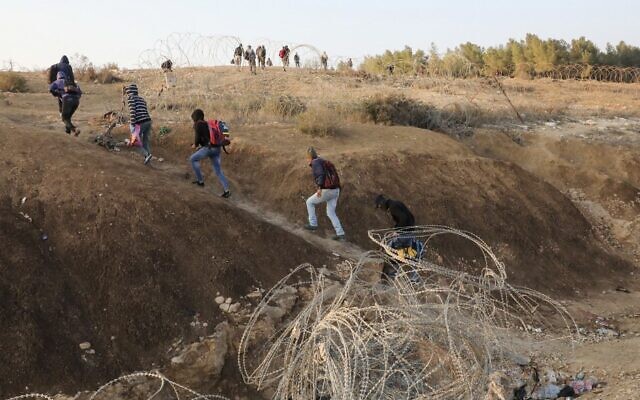 Palestinian laborers illegally enter Israeli areas through a hole in the Israeli security fence on November 20, 2019, near the southern Israeli city of Beersheba. (HAZEM BADER / AFP)

The security barrier has not been without controversy, however, as the fence has sparked local protests and international condemnation of its route, weaving into the West Bank through seized Palestinian fields and at times cutting off farmers from their land.

About 85% of the barrier runs inside the West Bank, with the remaining 15% running along the Green Line – the pre-1967 ceasefire line that delimits Israel from the West Bank – and inside the territory Israeli. In total, the barrier would have cost the country some 9 billion shekels ($2.8 billion) according to the Knesset Research and Information Center.

For most of its route, the barrier consists of a chain-link fence equipped with surveillance cameras and other sensors, protected by barbed wire and a 60-meter (200-foot) wide exclusion zone. In more urban areas – including around Jerusalem and Bethlehem – the barrier is not a fence but a concrete wall eight to nine meters (26 to 30 feet) high.

However, in recent years Israel has been accused of seemingly turning a blind eye to gaps in the barrier that are used daily by thousands of Palestinian workers to enter Israel illegally.

Analysts say Israel’s unspoken policy has been to allow as many Palestinian workers into Israel as possible to avoid economic hardship that can lead to desperation and create terrorists.

You are a dedicated reader

We’re really glad you read X Articles from The Times of Israel over the past month.

That’s why we started The Times of Israel ten years ago – to provide discerning readers like you with must-read coverage of Israel and the Jewish world.

So now we have a request. Unlike other media, we don’t have a paywall in place. But since the journalism we do is expensive, we invite readers to whom The Times of Israel has become important to support our work by joining The Times of Israel community.

For just $6 a month, you can help support our quality journalism while benefiting from The Times of Israel WITHOUT ADVERTISINGas well as access Exclusive content only available to members of the Times of Israel community.

Thanks,
David Horovitz, founding editor of The Times of Israel

Already a member? Log in to stop seeing this

KAYIN——A combined armed group attacked the Myanmar Economic Bank security outpost near Kawkayeik Myoma Police Station in Kayin State and the outskirts with guns yesterday morning, the sources said. A convoy of a combined armed group wearing the same uniforms arrived at the Myanmar Economic Bank and they opened fire on the security outpost. “The […]

Santander, Tesco Bank and TSB have “serious security vulnerabilities” that could expose their customers to fraud, according to an investigation by consumer watchdog Which ?. Who? conducted a survey with independent security experts 6point6, examining the online banking security measures in place at the largest current account providers. In some cases, he discovered the potential […]

A Demerara Bank security guard is in hospital after being involved in an accident Tuesday on the public road in village number 63, Corentyne, Berbice. Police revealed yesterday that the driver and owner of the car, PJJ 8191, who is currently in New Amsterdam Public Hospital following the crash, has been identified as Keith Griffith, […]